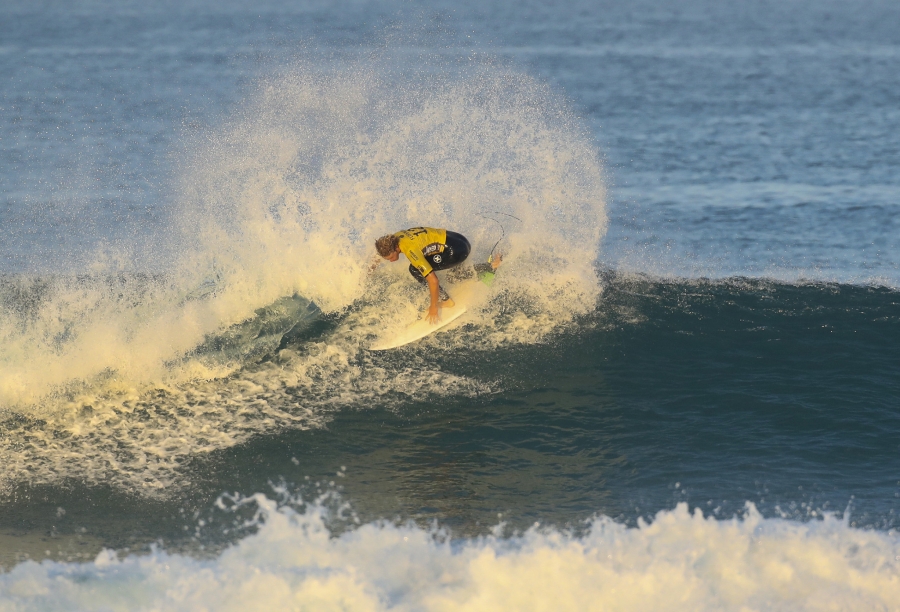 whittling the men’s and women’s fields down to the final four surfers and setting up the Semifinals for a dramatic finish later this week.

The hotly anticipated match-up between John John Florence (HAW) vs. Filipe Toledo (BRA) in the Quarterfinals turned into a progressive surfing show as waves started to shut down, offering limited options other than air sections. The current World No. 1 on the Jeep Leaderboard got his revenge over Toledo who outshone him in the previous round yesterday and advances to the Semifinals where he will face Keanu Asing (HAW).

“I’m super stoked just to make it through that heat, it’s like perfect conditions for Filipe (Toledo) right now,” Florence said. “The tide is real low and it’s really dumpy on the inside right now, a lot of the waves are running really fast.”

Current World No. 2 Gabriel Medina (BRA) showcased why he is the defending event winner in France as he took to the air to land incredible maneuvers to earn a phenomenal 15.07 combined heat score. Medina had the crowd on their feet as he performed epic stunts for the heat win over Julian Wilson (AUS). Wilson attempted to fight back, but with a 10.13 combined score, could not find the 8.24 needed to challenge the former World Champion.  Wilson will leave the event with a 5th place finish. Medina will face Kolohe Andino (USA) in the Semifinals. 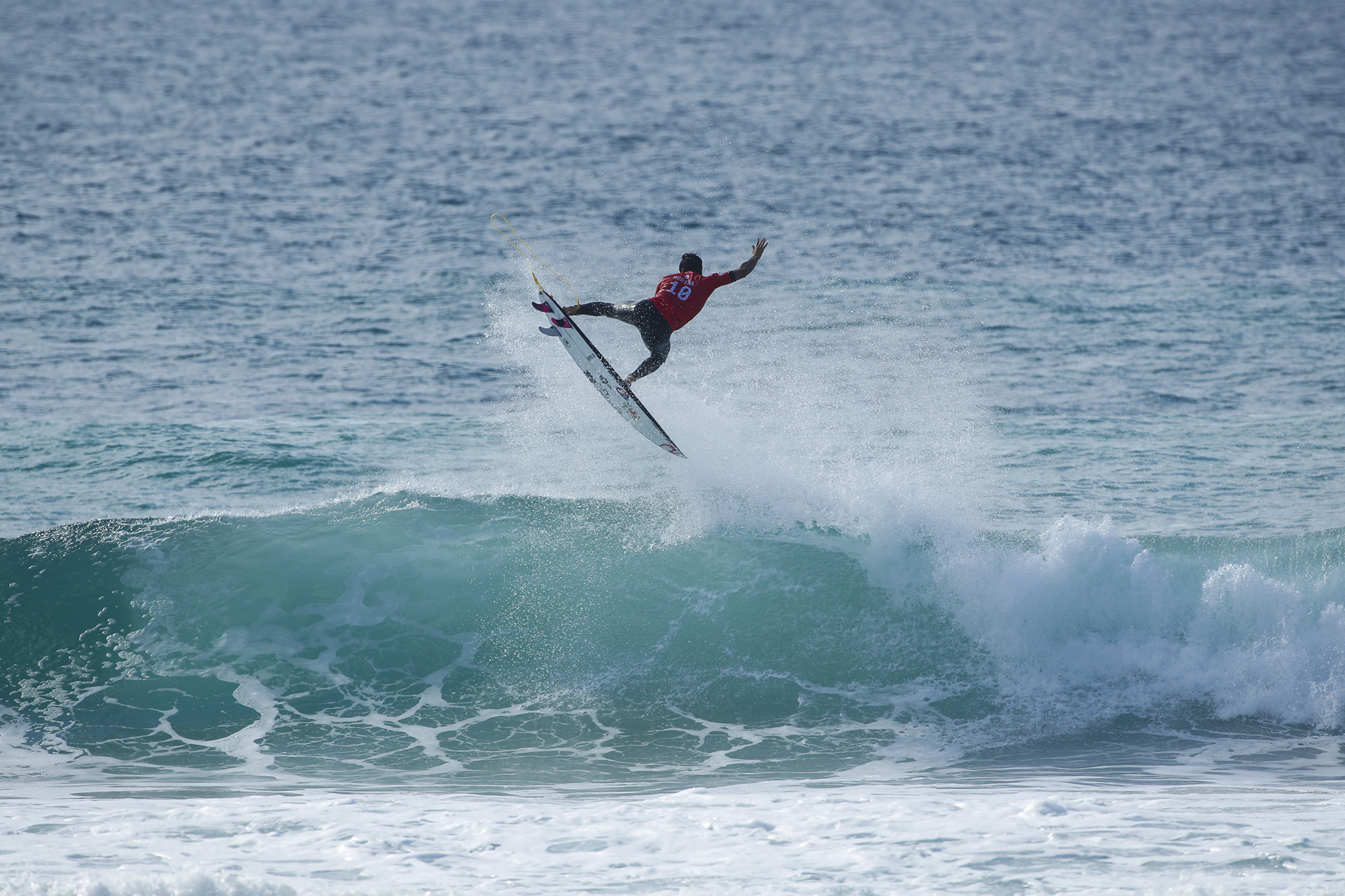 “That was a good heat, I was feeling tired before that one because of yesterday, but my board felt good and I’m stoked I landed those airs,” Medina said. “It’s good to be in the title race but it’s hard, not only because it’s against John John (Florence). Hopefully everything goes well and we have a good battle in Hawaii.”

The two dark horses of this 2016 Quiksilver Pro France, Matt Banting (AUS) and Keanu Asing (HAW), went head-to-head in the opening Quarterfinal battling for an all-important semifinal ticket as both surfers currently sit well outside the re-qualification bubble and desperately need the points. Both surfers exchanged multiple waves but ultimately it was Asing who built the stronger house and advanced to reach a career-first Championship Tour Semifinal.

“I’m just elated, this feeling is so surreal, to be here now in the semis is a dream come true,” Asing stated. “I’ve always dreamt of being on this tour, so actually making it to the Semifinals with the best surfers in the world is pretty amazing. I watched Carissa (Moore) light up a left when I was walking down the beach and it really got me fired up. We grew up surfing together at Kewalos and it sort of made me at home and I knew exactly what I had to do.”

Stopped in Round 5 by Florence, reigning WSL Champion Adriano De Souza (BRA) claimed an equal 9th place finish and will head to Portugal with a relative confidence boost after the Brazilian surfed three excellent heats in France to put a halt to an early loss streak in Tahiti and Trestles.

“For me it was definitely frustrating, if I had won that heat I would have made the Top 5,” De Souza said. “I know John John (Florence) is a tough man, number one in the World, he has a lot of pressure on his shoulders and I tried to use that as an advantage. I put everything I could in the last two waves, but it wasn’t enough.”

Kolohe Andino (USA) rounded up the day’s action and eliminated Kai Otton (AUS) to advance past the quarterfinals a second time this season. The Californian will face World No. 2 Gabriel Medina (BRA) in the semis when competition resumes.

The Roxy Pro France ran through Round 4 and the Quarterfinals to decide the event’s Semifinalists and whittle the field down to just four hopefuls for a title in France.

Tyler Wright (AUS), current frontrunner on the Jeep Leaderboard, will continue her charge for the WSL World Title as she defeated compatriot Laura Enever (AUS) in the second Quarterfinal heat. Wright, the two-time defending event winner, posted two strong 6-point rides on her backhand to advance to the Semifinals.

“I like the crowd and how they do not just cheer one surfer, but they cheer on everyone whether you win or lose up the beach or down the beach,” Wright noted. “As a general crowd that is pretty amazing. I plan to do my thing [in the Semifinal]. I do not know who is going to win or lose, but I know what I can do and I know me. I am happy with that. I have a very good team behind me so we will go after that heat with the same goal in mind -- to win every heat and win every final. Other than that, I cannot do much more.”

As the only surfer able to block Wright’s Title win in France, all eyes were on Courtney Conlogue (USA), current Word No. 2, in her Quarterfinal heat against Nikki Van Dijk (AUS). Conlogue unleashed a series of powerful backside turns to secure a 7.33 and a 7.97, but Van Dijk posted an excellent 8.60 to narrow the gap. Conlogue waited for a set to fire back with a near-perfect 9.17 to secure her place in the Semifinals and keep her World Title hopes alive.

“It is down to the nitty-gritty right now and Nikki (Van Dijk] got me in the first round so I did not want that to happen again,” Conlogue explained. “To be honest, I wanted to take the opportunity off of Nikki when I used priority in the last few minutes. I have had so many times where there has been a minute remaining and that one wave ends up being it. I decided to put my cards in when taking that wave. This World Title race is really exciting for me. Now, I am simplifying and giving myself the best shot I have.”

The final Quarterfinal matchup saw an intense clash between three-time WSL Champion Carissa Moore (HAW) and six-time WSL Champion Stephanie Gilmore (AUS). Moore powered through the heat with an excellent 8.67 and a near-perfect 9.57 to put Gilmore in a combination and take the win. Moore will advance to the Semifinals where she will face Conlogue. Gilmore will walk away with an Equal 5th place finish, her sixth Quarterfinal loss this season.

“I wish Steph (Gilmore) was on the other side of the draw so we didn’t have to meet up until the Finals,” Moore said. “I love competing against her, I think she brings out the best in everybody. I knew I’d have to go out there and swing my best swing if I wanted to beat her. It would be amazing to win her, so far this year it’s been tough for me to break the Semis and win.”

Tatiana Weston-Webb (HAW) fired in the opening Quarterfinal matchup to defeat Sage Erickson (USA). Weston-Webb put on a clinic with a near-perfect 9.47 and a commanding 7.77 second wave score. The Californian battled back with a 13.84 combined score, but could not challenge the Hawaiian’s excellent forehand rides. Weston-Webb’s win will mark her fourth Semifinal berth of the year.

“I have really just been enjoying myself this whole week and taking a serious/fun approach to this event,” commented Weston-Webb. “I feel really confident and feel like my surfing is there. As long as I catch the waves, I feel good. After the 9.47, I knew that was the most amazing, fun wave I’ve probably ever caught in a contest. I kicked out and thought that it should hopefully be an 8. I was really surprised when I heard it was a 9, but forgot how many turns I did on that wave.”

Previously, Erickson eliminated crowd favorite Johanne Defay (FRA) in the opening heat of Round 4, and continued her recent rise through the CT ranks to reach the Quarterfinals for the fourth time in a row.

“Johanne (Defay) has been one of my inspirations on this tour, when she qualified she came in as the last seed from the QS and she’s won events and completely transformed her surfing,” Erickson said. “Luckily I had good scores at the beginning, I would have liked to build on that 5 but I made it so I’m happy. I’m excited to compete, I have amazing people around in my life and it’s a beautiful time in our sport, I think the girls are incredible and I just want to be a part of that mix.”

Event organizers will reconvene at 8 a.m. tomorrow morning to assess conditions and make the next call.