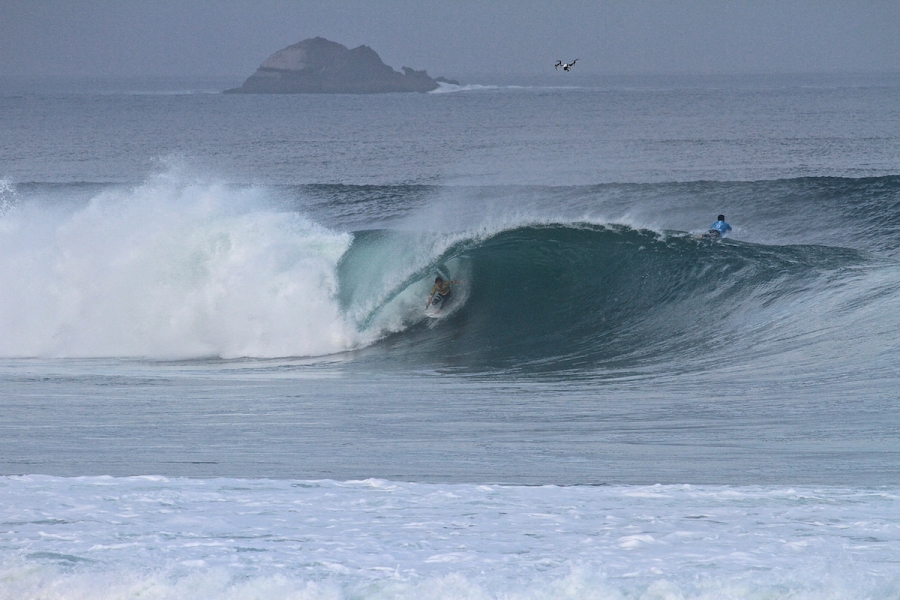 John John Florence (HAW), 24, was the first surfer to find an absolute gem in the moving lineup

The Meo Rip Curl Pro Portugal, the final European Stop of the Samsung Galaxy World Surf League (WSL) Championship Tour (CT), resumed today in pumping six-to-eight foot surf at the secondary venue of Pico do Fabril in Peniche. Competition ran through the Round 4 and the opening heat of Round 5 before contest officials decided to put the event on hold through the low-tide and eventually called it off for the rest of the day.

Current No. 1 on the Jeep Leaderboard John John Florence (HAW), 24, was the first surfer to find an absolute gem in the moving lineup of Fabril to lock in a long and hollow barrel and a quick closeout hit for an excellent 8.50 and the heat lead over Michel Bourez (PYF) and reigning WSL Champion Adriano de Souza (BRA). Florence continued to distance himself from his opponents with flawless surfing on the large lefts on offer to move into the Quarterfinals and push Kolohe Andino (USA) out of the WSL Title race.

“As I was paddling into that wave I was just looking at Adriano (de Souza) thinking he might get it but I just had to go just in case and luckily as I was getting to the bottom I saw him just not get it, that thing was just so perfect!” Florence said. “When we first rocked up in the dark it looked like just big closeouts but as the light came up we saw some perfect lefts, this bank is amazing and hopefully it holds through the low tide.”

Kolohe Andino (USA), 22, dominated the opening heat of Round 4 to claim his ticket for the Quarterfinals in Peniche. Fresh from a third place finish in France, the Californian continued to showcase his excellent form in the solid surf of Pico do Fabril and put Australians Joel Parkinson (AUS) and Julian Wilson (AUS) in a combination situation, courtesy of his radical backhand attack and great wave selection.

“It was pretty tricky, I checked this morning and it was bombing, lots of closeouts and the swell has straightened out so it’s pretty quick,” Andino explained. “I’m really stoked to have picked the good waves in that heat that allowed me to do some turns. I’ve never beaten Joel (Parkinson), he’s always “out man-ed” me in the past and Julian (Wilson) -- we’ve had a bunch of heats together and he’s always super hard to beat so I’m really stoked to get that one.”

Miguel Pupo (BRA), 24, capitalized on attacking the pumping lefts on his forehand to relegate Jeremy Flores (FRA) and Sebastian Zietz (HAW) to the fifth round, while he’ll join Florence and Andino in the Quarterfinals. Pupo’s 16.43 combined heat total was built on a clean tube and a combination of slick turns on a lengthy ride.

“Yesterday was the heat of my life against the best surfer in the world Kelly (Slater), today I felt more relaxed and just tried to have fun and catch waves,” Pupo admitted. “I used the same board I surfed in Rio and also Fiji, it felt really good there and today it’s a good left so I was happy with that.”

World No. 4 Jordy Smith (ZAF), 28, clinched a last-minute win over Stuart Kennedy (AUS) and 2016 WSL Rookie Conner Coffin (USA) to advance directly into the Quarterfinals and keep his World Title race alive in Portugal. Smith, who opened his account with a decent 5.83, remained patient and waited all the way into the final moments of the 35-minute matchup to unleash on a solid set wave for a massive 8.83 and the win.

“I have to do the same thing every time I compete, I have to get my morning surf and get the jitters out,” Smith said. “I was the first one out this morning, only got one wave but it was a good one, then I only got two more in my heat! High tide is definitely better for the number of rides that are makeable but right now on the low it’s really crunching on that bank and it became like a massive rip bowl. I was so lucky to sneak that last wave under priority.”

De Souza, 29, was the last surfer to take it to the water today before competition was put on hold and eventually called off for the day. The reigning WSL Champion narrowly edged out Joel Parkinson (AUS) in a low-scoring round five affair to advance into the Quarterfinals where he’ll be facing Andino when the event resumes.

“It was such a hard heat, conditions were really tricky only a few waves in the inside were good but the judges usually want to see the bombs so it was tough to make the right decisions,” De Souza said. “What I did on the outside turned out to be enough, so I’m glad to be in the quarters and I can’t wait for the next battle. With this result I’ll have a chance at Pipe to fight for a spot in the Top 5 so I’m really happy with that. I’ll try my best here and as soon as we’re finished in Portugal, my training and my focus will be on Hawaii.”

Event organizers will reconvene at 8 a.m. (local time) tomorrow morning to assess conditions and make the next call.

Official forecast of the WSL, are calling for:
Stronger NW/WNW swell for Saturday with better conditions at the more northerly facing spots as onshore winds develop and increase for Supertubos. Rising surf for Sunday with strong SW winds setting up unfavorable conditions for many locations. Very solid surf for Monday with strong SSE winds. Easing swell mix for Tuesday with more manageable SE becoming ESE/E winds. Smaller leftovers for Wednesday/Thursday with minor W/WNW swell to close out the final days of the waiting period.