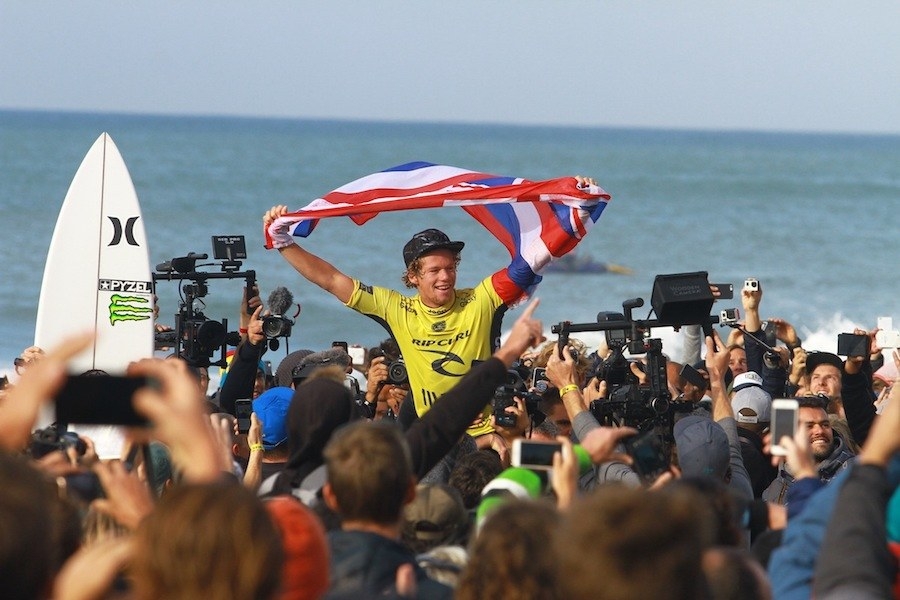 Florence’s season started out slowly with mediocre results across the Australian leg before posting a victory in Brazil in May.

“It’s been a long year, but one of the best years in my life, so many fun events and just having a really good time all together and I’ve learned so much,” he continued. “I was expecting it to go to Hawaii and I was just trying to keep surfing through heats.”

A six-year competitor on the elite WSL Championship Tour, the Hawaiian had been threatening the throne since his inception in 2011 having previously finished 4th (2012) and 3rd (2014). Seemingly destined for surfing excellence since stepping foot on board at two years young, Florence has spent the last two decades evolving into one of the most dynamic talents the sport has ever seen.

“My whole life has gone into this, everything I’ve done but just this year especially, learning so much about competitive surfing, focusing completely on it and having so much help and support, it’s been amazing.” Florence added. “The title was my goal this year so at this point I’m just going to go out and have fun.”

The newly crowned WSL Champion took on rookie Conner Coffin (USA), 23, in an exciting Final where the two surfers adopted different strategies for the final bout of the European leg. Florence took things to the air with numerous massive rotations while Coffin kept chasing the tubes, successfully navigating a deep one for an excellent 8.60. Florence’s flair peaked in the Final with a huge alley-oop for a 9.50 and the win. Coffin secured a career-high runner-up spot on the Championship Tour and rocketed to No. 19 on the Jeep Leaderboard.   “This feels amazing, I love Portugal, the waves are so fun and the people are amazing, food’s good, it feels kind of like California and I feel right at home here,” Coffin said. “Obviously I know John and everyone in his camp from Hurley and Pyzel but I wasn’t thinking of his title too much in my semifinal heat. I was focusing on doing my job, I had a lot to do here in this event to stay on tour for next year so that was my goal. ”   World No. 3 Jordy Smith (ZAF), 28, couldn’t match Coffin’s rhythm in their Semifinal clash despite excellent surfing in the Supertubos barrels and was forced out in third position, putting an end to his World Title campaign for 2016.   “I’m really happy with that result, obviously I would have loved to go to Hawaii to fight for the title but I’ll take it,” Smith admitted. “I started as an injury wildcard this year so I’m just glad to be back surfing at my best and to end with a title shot is really an achievement so I’m happy with this year. I’m still fighting to try to get second so i’ll continue up to Pipe. After the season ends I just want to take some time off and regroup and try to improve in every aspect that I can towards next season.”   Kolohe Andino (USA), 22, secured his second consecutive Semifinal berth following his performance in France, but once again fell just short of reaching the Final, eliminated in this morning’s opening heat by Florence. With a third place in Peniche, the Californian cements his World No.5 position before the final event of the season in Hawaii.   The next and final stop on the 2016 Samsung Galaxy WSL Championship Tour will be the Billabong Pipe Masters in Memory of Andy Irons from December 8 - 20, 2016.