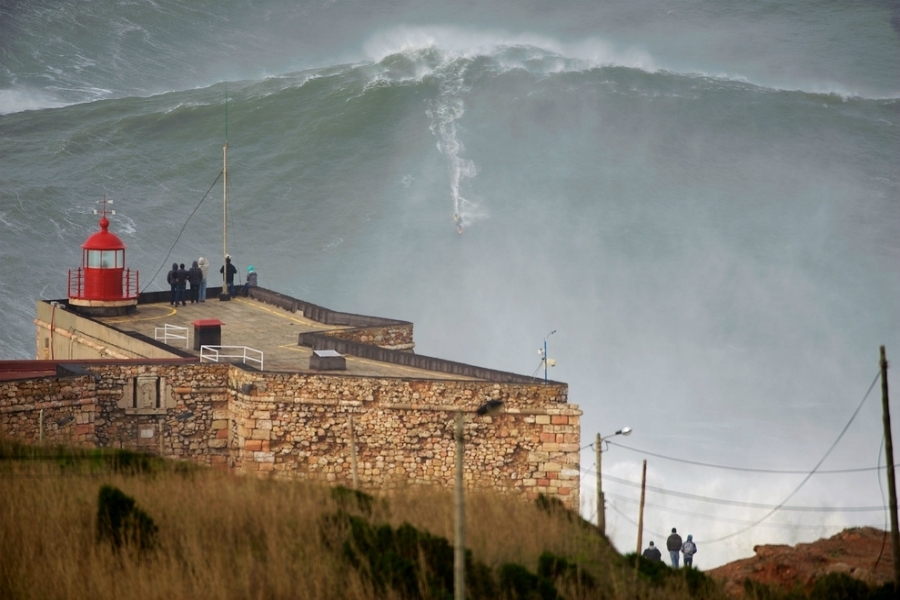 Everybody did, so someone got the answer

Thanks to a telemetry system developed by Mercedes-Benz in the context of the MBoard Project – which resulted in the construction of four luxury surfboards exclusively for Garrett McNamara, it was possible to measure the speed that GMac can get when catching those Nazaré bombs.

He was glocked going at 62,4 kilometres per hour! And that is pretty amazing. Just before he left Nazaré heading back to Hawaii, Garrett spoke at the airport, and had something to say about the material he used: "The boards have to be able to handle faster speeds and be able to absorb the chops. The Mercedes board is magic and is made especially for these conditions. The board really is the best I have ever ridden in giant, choppy waves", he stated.

Garrett's explanation continued: "It is very stiff between the feet and very flexible in the nose. It conforms to the nose and carries speed like I have never experienced. The weight is built into the board instead of screwed onto the top. It makes a bumpy out of control ride smoother and fun".
Asked about his partnership with Mercedes, he said:"Mercedes approached me to make the ultimate board for the conditions we face out there. I don't know anybody who would have said no. They produce the highest quality with all the latest technology so I was honored and gladly accepted". Garrett just keeps on surprising us, and acting more like an alien than a regular human. Keep it up!

Anterior MONSTER FORECASTS FOR THIS SATURDAY IN EUROPE Próxima WCT 2014: LET THE GAMES BEGIN, BUT WITH EVERYBODY INJURY FREE!