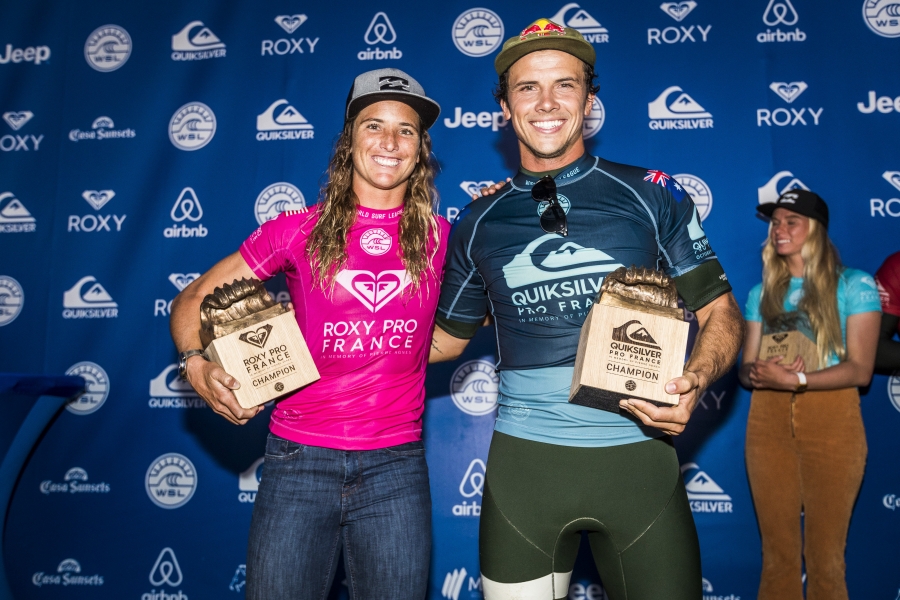 ...Stop No. 9 of the World Surf League (WSL) Championship Tour (CT). The final day of competition witnessed Wilson and Conlogue plow through a stacked field to earn their momentous wins at the 17th running of the iconic French event.

Wilson’s victory in France is his second of the season after the Quiksilver Pro Gold Coast earlier this year. Only a month before the 2018 season opener on the Gold Coast, Wilson suffered a serious shoulder injury and it was unclear whether he would be able to compete. The win today proves his determination and the fact that the 29-year-old is not giving up his hopes for a maiden World Title. Wilson now strengthens his third place position with only 4,645 points separating him and World No. 1 Gabriel Medina (BRA).

“My emotions come from dedicating this win to Pierre Agnes,” Wilson said. “He was such a beautiful human being. Thank you, Pierre. All the surfers love you. The moment of silence before the Final shook me, everything he’s done for surfing here in France and I’ve always dreamt of winning this event." 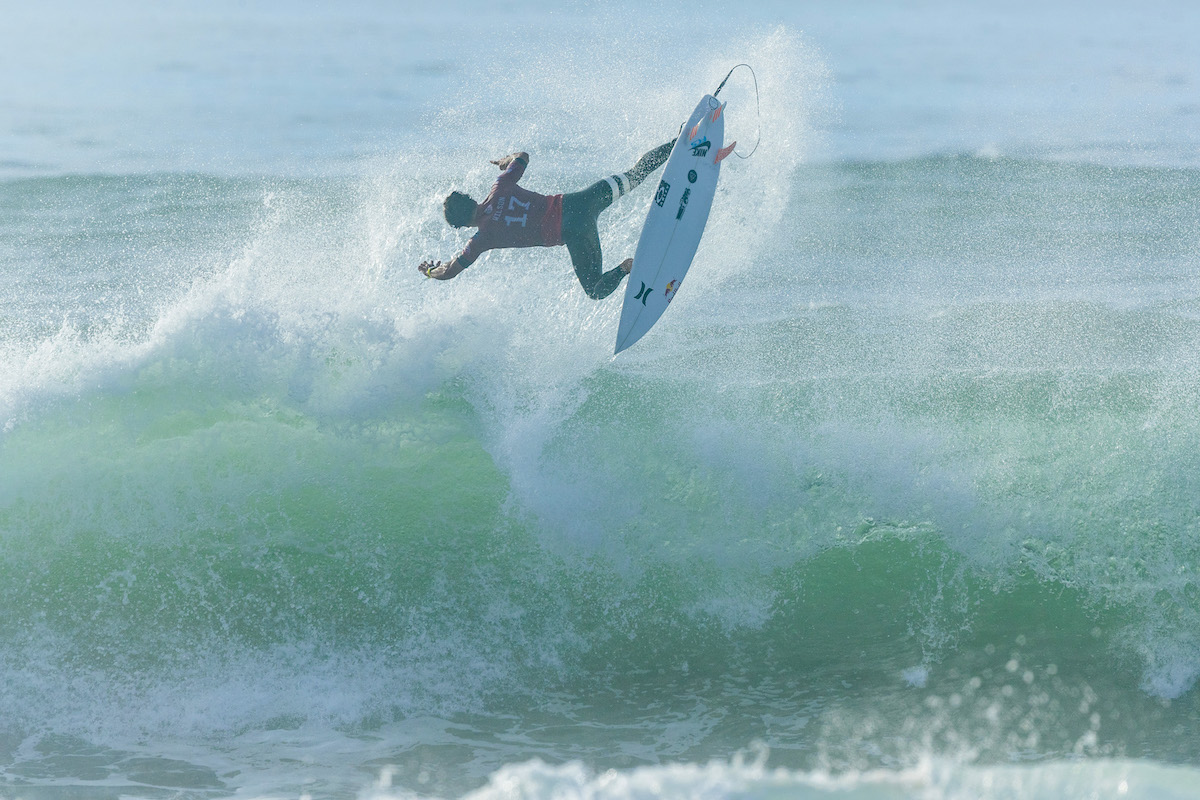 Conlogue has been fighting her way back to the top following a foot injury that sidelined her for the first half of the season and today’s victory marks a triumphant confirmation of her new-found form following a win at the Vans US Open of Surfing and a fifth-place finish at the Surf Ranch Pro. The Championship Tour veteran, in her eighth year competing with the Top 17, claims her first-ever win in France and the eleventh of her career, pushing her up to No. 8 on the Jeep Leaderboard.

“This whole event has been quite the journey,” Conlogue stated. “I had a lot of fun out there today, the conditions were so clean in that Final and I was just frothing. I had to keep my cool cause I was feeling like a grom! I wanted to be here in this position [with two event wins], but it was a matter of believing and working really hard. I came here with a little injury, but it was good cause it made me slow down a bit and forced me to maintain energy over the lay days." 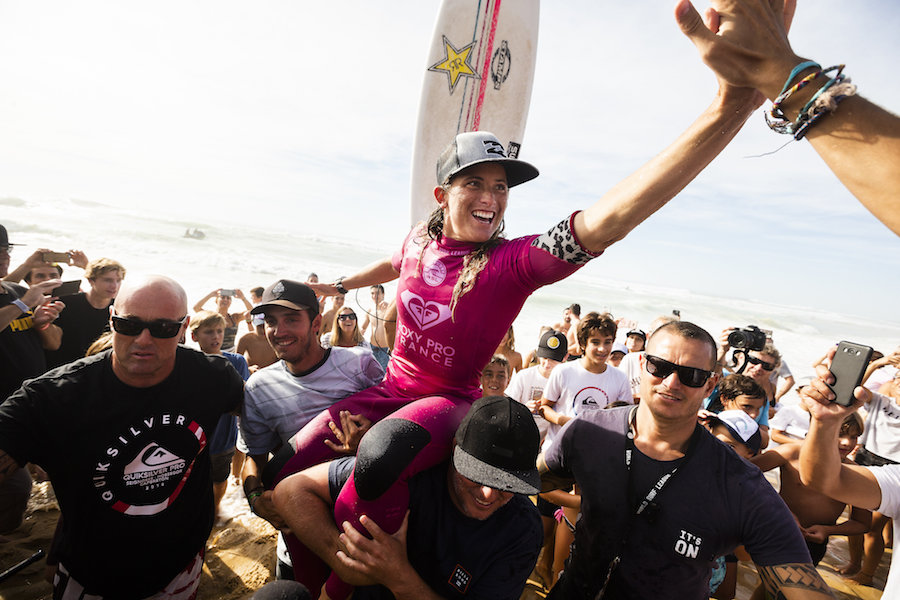 In a slow start to the men’s Final, Ryan Callinan (AUS) fired first with a good left, hitting the lip multiple times all the way into the shorebreak for a 6.83 (out of a possible 10) and the lead. Following a short interruption due to the evening fog coming through the lineup, Wilson answered with a tail-high full rotation for a 6.67 to tighten up the battle. Just before the 10-minute mark, Callinan laid into a powerful layback snap to grasp the Final’s lead with a 7.40. But Wilson picked up where he left off in the Semifinals and launched a big backhand full rotation for an excellent 8.67 to steal the lead off the wildcard. Time ran out on Callinan chasing a 7.95 and Wilson took the win.

“To share the Final with Ryan (Callinan) was incredible too,” Wilson added. “I loved surfing against (Gabriel) Medina, too. There’s just so much I can be thankful for. I had to bring my A-game to beat Ryan in the final. I’ve lost my first Final here against Medina and I think I hold a grudge since then and this year finally it happened.”

Callinan comes off a tear on the Qualifying Series, culminating with his win at the QS 10,000 in Ericeira two weeks ago, which sealed the deal on his qualification for the 2019 Championship Tour. The goofyfoot from Newcastle perfectly transitioned to the big leagues in this event, showing he deserves a full-time spot with the world’s best surfers. Callinan spent one season on the CT in 2016 but never made it past 9th place back then, and the runner-up result today marks a career-best achievement for the 26-year-old.

“This doesn’t feel real but more like a dream,” Callinan said. “I’m sure it’ll sink in soon though and I’m just so happy to be here and be a part of it in France. It’s really exciting. I couldn’t have asked for anything better [than sharing the final with Julian Wilson], even finishing second to him, I know he’s going for something special and that was a big event for him. We’ve grown to be really good friends and I was happy to share that special moment with him.”

Callinan will have another opportunity to show his place amongst the world elite as the wildcard on the next stop on the men’s CT, the MEO Rip Curl Pro Portugal, which opens on October 16, 2018. 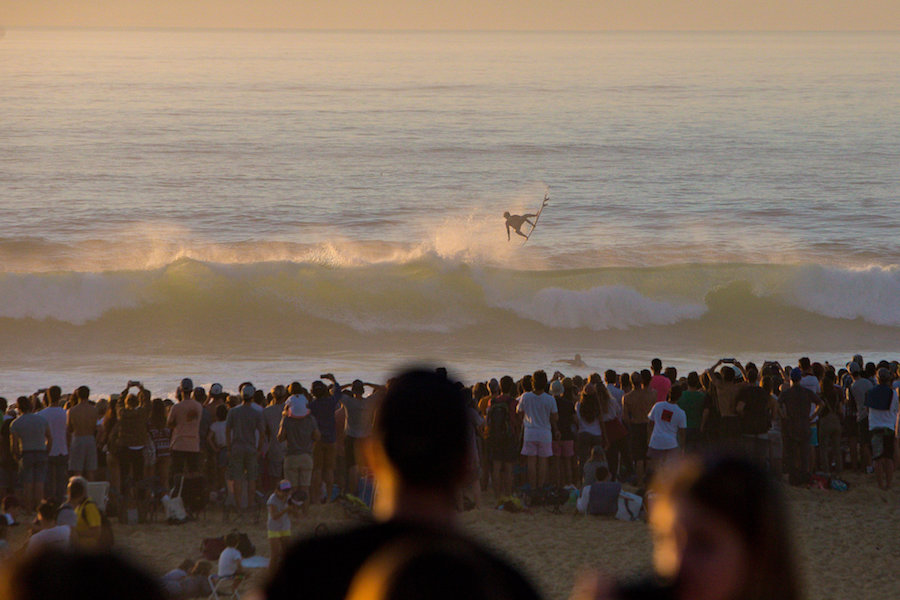 The 2018 WSL Title race previously heated up in the men’s second Semifinal as Medina and Wilson fought it out for a place in the Final. The 30-minute heat was an unbelievable exchange of aerial mastery between two of the most progressive surfers on the planet. Wilson launched and landed a crazy inverted backhand rotation to post the event’s first Perfect 10 point ride and defended it with a good 6.67 for the win. Medina fought back with a great wave on which he performed two airs, a straight air with a grab first and a forehand rotation to finish it, but the score came in as a 7.77, short of the 9.01 required score to turn the heat.

Wilson’s incredible performance deprived the 2014 World Champion of a shot at a third straight event win in France and put a stop to his incredible streak on the Championship Tour lately. The 3rd place finish now vaults Medina to first on the leaderboard and he will now wear the yellow Jeep Leader Jersey at the upcoming MEO Rip Curl Pro Portugal.

Roxy Pro France winner Conlogue started the Final against Macy Callaghan (AUS) with a massive layback snap on a set wave to post a 7.33 (out of a possible 10) on this single, highly technical maneuver. The Californian quickly backed it up and continued to build momentum, surfing the long rights with her aggressive forehand attack to eventually build a 14.74 heat total (out of a possible 20). Callaghan fought on a similar playing field, catching several good rights but couldn’t quite match Conlogue’s power in the turns or link together a long wave to get back in the fight. With only two average scores on the board, the 17-year-old Australian never really threatened Conlogue for the win.

"I said before the Final that if I can find some rhythm and if the ocean and I can link up and have the same high voltage then I can put in a statement performance, which I think I did," said Conlogue. "It's a huge win in a place I love. I couldn't be happier."

Callaghan, 17, is Australia’s next up-and-coming superstar. As the 2016 World Junior Champion, all eyes have been on the young surfer as she has been given the opportunity to compete on the WSL CT as a replacement for injured CT competitors. Today’s finish marks Callaghan’s career-best result in only her eighth time competing at the most elite level of professional surfing. On the cusp of qualification for the 2019 season, she will undoubtedly be a competitor to watch and a key player in surfing’s next generation.

"I had a bad run at the start of the year and Bells was probably the low point,” Callaghan stated. “I was emotional and not in a good place. I wasn't believing in myself or my surfing. I haven't even made the Final of a big Qualifying Series event before, so to make my first Championship Tour Final is unbelievable. I'm disappointed that I didn't perform to my best in the Final, but the bigger picture is so positive. There's been a big change and that is that I believe in myself and my surfing. I've learned so much here in France and had so much fun doing it. I'll never forget this experience."

Callaghan had an amazing road to the Final in France, defeating many great surfers on her way to a career-best result. It started in Round 2 with a victory over Nikki Van Dijk (AUS), continued with a second place in Round 3, eliminating veteran Sally Fitzgibbons (AUS) in the process, and two wins over Coco Ho (HAW) and Bronte Macaulay (AUS) in the Quarterfinals and Semifinals.

Three-time WSL Champion Carissa Moore (HAW) started her Semifinal with a good sized right and a beautiful drawn-out carve, finishing the wave with a radical snap for a 7.83 and the early lead. But while her opponent - eventual winner Conlogue - was keeping busy catching waves, the Hawaiian scoured the lineup unable to find a wave to her liking. Moore eventually picked up a wave in the last minute of the heat but it shut down too early and she couldn’t score the required 6.31, placing Equal 3rd and missing her chance to earn a third-straight event title in France.

In the second Semifinal, Macaulay couldn’t keep the excellent form she’s been displaying since the start of the event and was forced to watch Callaghan’s success story continue. The Australian goofyfoot captured a career-second Semifinal berth, the first of her 2018 season.

The final stop on the Women’s WSL Championship Tour will be the Beachwaver Maui Pro. The holding period will open November 25 and run through December 6, 2018. During this time, event officials will monitor the conditions and run the event during the best conditions.

The World Title scenarios are as follows:

- Gilmore will win the World Title with a 3rd or better at the Beachwaver Maui Pro.

- If Gilmore finishes 5th or worse, Peterson must win the event to force a surf-off* for the World Title.

*In the event of a tie for any World Title at the end of the Surfing Season, the tied Surfer will have a “surf-off” during the final Event, which will have the format determined by the Commissioner’s Office.